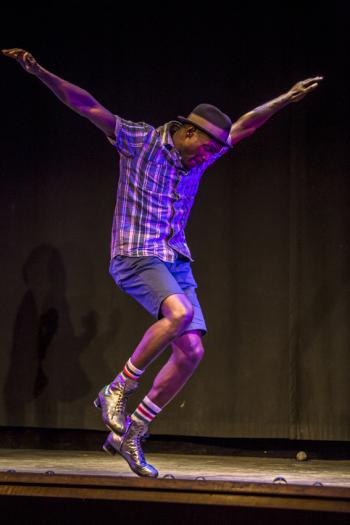 Joseph Wiggan is a native of Los Angeles where he began tap dance with Paul and Arlene Kennedy at the age of nine. At age 10, as a member of the Kennedy Tap Company, he began traveling throughout the states and other countries performing in a diverse spectrum of shows. Joseph then joined the Jazz Tap Ensemble, and later became a member of Jason Samuels Smith's tap company, A.C.G.I. Joseph has appeared as a performer and teacher in many tap and jazz dance festivals in Guatemala City, Guatemala, Stockholm, Sweden, Berlin, Germany, St. Petersburg, Russia,  Paris, France, Tokyo, Japan and Barcelona, Spain to name a few. Joseph is a 2003 Spotlight Award winner, 2004 Presidential Scholar in the Arts and winner of the 2005 Princess Grace-USA Award for outstanding artistic achievement. Joseph performed in the 2006 tap dance musical Imagine Tap!, choreographed by Derick K. Grant, and toured two years in France and abroad in the parisian production of Looking for Josephine, directed by Jerome Savary. He has since performed in concert as a featured guest with Orlando Poleo, Roy Hargrove, Marcus Strickland, and Wynton Marsalis. Joseph tours in a tap dance duo act, The Double J's, with his older sister Josette, recently in Cirque du Soleil's Banana Shpeel, and Cirque du Soleil's Michael Jackson:The Immortal World Tour. Joseph was accepted to the New School for Jazz and Contemporary music as a tap dancer, and hopes that other tap dancers will apply to university jazz programs worldwide.